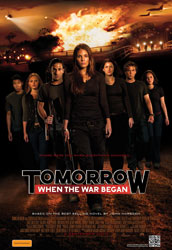 Vinyl cladding from Mitten Vinyl Australia played a vital role in production of the blockbuster Australian full-length feature movie "Tomorrow: When the War Began", which is about to be released. A house which had been used for location filming had to be recreated in the studio and the set designers turned to Mitten Vinyl Australia for assistance.

Cambridge vinyl cladding in Ivory was used in the building of the set at Fox Studios, where filming of many scenes took place. The movie is based on the popular young adult novel by John Marsden about a group of teenage friends who go on a camping trip, only to become involved in a war when their hometown is invaded. Location filming took place in the fictional township of Wirrawee, and part of a vinyl-clad house located in this township was required for scenes filmed in the studio. The light weight and ease of construction of vinyl cladding from Mitten Vinyl Australia was perfect for the task, creating a realistic replica for the vital scenes.

BACK TO MITTEN NEWS